Some of you who have followed me for a while may remember that every year for the past few years I have chosen a word for the year. Instead of making New Year’s Resolutions, I choose a word, an overall theme, for the year ahead. Christine Kane, my business coach and mentor, inspired me to start doing this all those years ago. 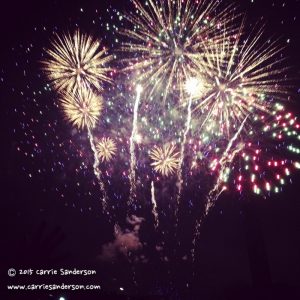 I’ve taken it from the old saying “to sparkle and scintillate”. There is a personal story behind that phrase, and one of the reasons why I chose “sparkle” is because of this story.

I was born and brought up in a different country to my passport country, and thus a different country to my parents. I am an (adult) Cross-Cultural Kid. Growing up I missed out on British culture and lots of sayings and phrases. Kind of like learning a second language – you often miss nuances, slang, hidden meanings, connotations, that are culturally ingrained. To an ‘outsider’ it can be frustrating.

Anyway, my parents – and my dad in particular – would often tell my brother and I to “sparkle and scintillate” at the dinner table. I didn’t have the heart to admit I didn’t know what “scintillate” meant. So I would judge the context in which it was said and then assume what it could mean. And for decades I thought it meant “shut up and just sit there looking pretty”!

As you can imagine, thinking no one wanted to hear what I had to say held me back from speaking up. It didn’t help that as a child I’d had years of ear trouble and I’d grown more and more introverted because I couldn’t hear the outside world. There were many times I missed what was said and then repeated it unknowingly only to be ridiculed for it (especially in school). So I learnt to keep my mouth shut.

It wasn’t until probably a year or so ago that I finally asked my parents what the saying meant – and what a relief to know that I had been wrong. I was sad that I had spent all those years believing nobody wanted to hear my voice. I guess I could have looked it up in a dictionary*** but it never crossed my mind to do so.

So for me choosing sparkle has two parts to it – I am also choosing scintillate. I feel this is my time to show the world my art and my true self.

To speak up, use my voice and express myself fully and authentically.

We all have a voice and it’s important we connect with our inner truth and express it so that we can lead more joyful, loving and fulfilling lives.

What is your word for the year? And why? What intentions have you set as a result?

scintillate
/ˈsɪntɪˌleɪt/
verb (mainly intransitive)
1.
(also transitive) to give off (sparks); sparkle; twinkle
2.
to be animated or brilliant
3.
(physics) to give off flashes of light as a result of the impact of particles or photons]