Waiting: A Poem About A Gull

The other week I put out a request on my Facebook page for some title suggestions for one of my pen and ink wildlife drawings. I called it Friday Fun.

I didn’t expect to get so many wonderful suggestions! It thrilled me to bits. I found it hard to choose one, so I put everyone’s name who contributed on a piece of paper into a hat and picked one out: my lovely friend Dawn! 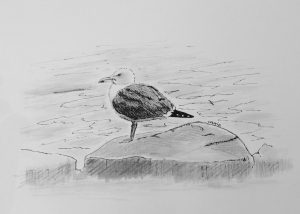 However, the fun didn’t stop there; well, for me at least. It sparked an idea to write a simple little poem about the bird in the drawing – a herring gull standing on a small rock by the side of a loch in Edinburgh (see photo – please note a black/white filter has been applied).

Since September I have been taking my writing more seriously again by cultivating a habit of daily writing, not just in my journal but other projects that I am keen to focus on once more. I’m also having some invaluable guidance and support from a writing mentor.

One of these projects is re-connecting with my poetry. I used to write poems when I was a teenager. They helped me to deal with and channel my turbulent emotions back then. I re-read them recently and discovered some of them are quite good (in my opinion).

Whether they are “good” or “bad” doesn’t matter that much to me though. It’s more about having a record of where I was, what I was feeling and expressing myself through words. For me these poems are like my journal, my diary of my life. I read them and I instantly know where I was – they are my memories, like photographs in an album. Snapshots of feelings and being human, remembering being a teenager. A sense of place, time and space.

Since then I have written poems on and off, and sort of forgotten about them once I’ve written them. Now I have also re-read the ones I wrote when I was at university in Sheffield, when I was living in the Netherlands again a few years ago, and I am delighted and inspired by them all. I commit to continuing!

Taking this opportunity to write something about one of my drawings excited me, and it was also a thank you to all who had contributed their ideas to me. I was touched people took time out for this. I didn’t want to waste those wonderful words!

Without further ado, here is my poem below – I hope you enjoy it. I loved writing it.

“I used to be a Dinosaur”,
the gull thought
to himself
“Hmmm, what’s next?
Am I now a Patient Gull,
a Zen Gull,
a Gazing Gull,
or a Gleeful Gull?”

“I’ve never been an angry
bird, but a thoughtful bird”,
he contemplated
scanning the horizon
before him

Waiting…
and
just Being

Instead he finds new questions
– “is that not life?”, he wonders –
What’s for supper?
To fly or not to fly…?

Waiting…
for the answers
to come.

3 thoughts on “Waiting: A Poem About A Gull”