Birds Help Me To Get Unstuck 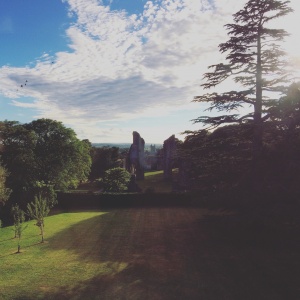 Ironically I’ve been a bit stuck with publishing my blog posts since I was on a writing retreat at the end of June. I’d been so inspired there that I was raring to go when I got home, only to find myself right back in the middle of “life” and things happening. A stark contrast between the sanctuary of the retreat I’d been on and the busy-ness of a city lifestyle.

I was still able to write when I returned but for some reason I just couldn’t finish a piece to post on my blog. I had set myself the intention to post weekly, but found myself not being able to do it.

It could have been procrastination.

It could have been fear.

It could have been that I needed time to integrate what I’d done at the retreat.

I’d been on such a high at the retreat when I’d shared one of my posts and received such great feedback, that when I was home and back in my “normal” environment, some of the old triggers were there and my mind kept telling me “That’s it, I can’t top that piece! I have peaked so I can’t possibly go on with this writing and write something that will be anywhere near as good as that”.

Almost three weeks passed, and I had a session with my writing mentor in between and after that I was inspired to post again, but then the same thing happened….I couldn’t finish something. I thought I was stuck in fear again.

So on Friday enough was enough! I knew something had to change.

Over the weeks, months and years I have got to know myself pretty well, especially through creativity. I know my patterns. I know my flaws. I know my strengths, too.

I took a moment and checked in with myself. I got honest and realised there was something I needed to do. I needed to take a break. A proper break. Get away from my desk, from my writing, from my other current priorities and switch off. Or at least dial down the noise, the distractions, the voice in my head nagging that I hadn’t done a blog post.

I knew I needed my birds.

I needed time to be. 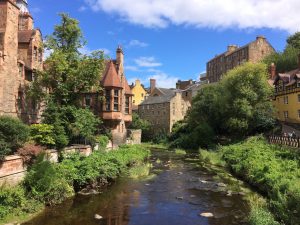 Grabbing my bag packed with my camera, travel sketchbook, notebook and pencils, I hopped on the bus to kickstart my mini mission to find one of my favourite birds that always brings me joy, the Dipper. I knew its hotspot along the Water of Leith in Edinburgh, a river that snakes through the city from the port of Leith at the north end to Balerno just south west of the city at the other end.

Wandering around Dean Village I had no luck finding any, however, it was such a beautiful day I suddenly didn’t care. I was just pleased I was out in nature. I surrendered and with that, I felt fear melt away and all was well again. I felt relieved of the stuff that had been whirling around my head.

I walked along the water towards Stockbridge, and at St Bernard’s Well found a bench half in the shade, half in the sun, to sit and watch people and dogs walk by, or any birds that would fly past. I was there for a while, continuing to surrender and being okay with perhaps not seeing a Dipper.

After a while something fluttered by and I got up to get closer to the water’s edge and saw a green finch on the other side. I then decided to meander towards Stockbridge and do a detour through the Botanical Gardens before re-joining the Water of Leith walkway.

I’d only gone a few metres to where an older gentleman was stood watching the water and I saw what he’d seen…a Dipper! My heart jumped with joy. My patience and surrendering had been rewarded. 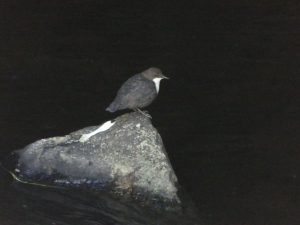 I spent time watching the beauty; I think it was young as its colouring wasn’t as vibrant as an adult’s plumage. I took lots of photos with my camera too, though it was a little tricky since it was stood on a little rock in a very dark spot and I was in full sunlight. Playing around with my camera’s settings was quite fun and a learning curve.

Fifteen minutes later I was ready to go and so was the Dipper. We parted and I continued on my walk, spotting a heron hiding between the leaves and trees, delighting me even further.

I may not have written immediately after this little adventure but two days later I started writing the first draft of this post. My mini break in the afternoon had done the trick as well as taking time out over the weekend to properly relax. It showed me yet again how important well-being is for my creative flow and my creative work.

Watching one of my favourite birds had soothed me and relieved me.

Being in nature had helped me to come back home to myself again.

What helps you when you feel stuck? Does nature have the same affect on you as it does on me?

8 thoughts on “Birds Help Me To Get Unstuck”