How I Came To Love Birds 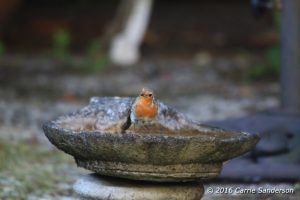 I love birds. They inspire me. It wasn’t always this way though. I remember I loved animals as a child, but then somewhere along the line I lost interest in them (even though at one point I’d wanted to be a vet!), and instead turned my attention to studying, getting good grades, a degree, and a good job to earn lots of money. Because that is what makes you happy and that’s what you do with your life, right?

Without going into too much detail, let’s just say that backfired on me! I found out in my twenties the hard way that that wasn’t going to work out for me.

When I turned 30 I moved back to The Netherlands – where I was born and brought up – after having lived in Bristol, UK, for about six years. It was at a time when things weren’t going too well and I needed some time and space to figure things out. I moved in with my parents and that’s when my love for birds began.

My dad was retired and into photographing birds. In my parents’ garden birds were prevalent: blackbirds, robins, thrushes, jays, jackdaws, and pigeons were always in and out, a hive of activity. Dad would often whip out his camera and beautifully photograph some of these garden birds.

My mum had inherited my grandfather’s stone bird bath after he and my grandmother had moved into separate care homes and their house had been sold, and their belongings sorted through and either passed on or thrown away.

The bird bath took centre-stage in the back garden and I began to watch the birds when they would use it. Before this I didn’t know what all the fuss was about watching birds in the garden. I’d not paid attention to it nor was I particularly interested in it.

But as I started observing the antics around the bath, the quibbles between the different types of birds, and using binoculars to study them more closely, I began to appreciate them. I chuckled as the scene around the bird bath reminded me of a television soap opera. Who knew there would be so much drama! Sometimes it seemed like a Saturday night gathering at a local watering hole.

I don’t know if I was depressed in my early thirties, but I certainly wasn’t happy. The only thing that gave me any kind of joy each day were the birds. I would wish I was like a bird, able to fly away and be free…yet my life was the opposite: I felt caged, backed into a corner and unable to see a way out. 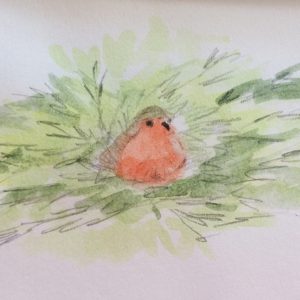 Robins are one of my favourite types of birds, and the irony wasn’t lost on me that my mum’s maiden name is Robin and I’d always called my grandfather ‘Grandpa Robin’.

I loved the robins’ feisty characters for such a small creature. They could stand their ground. It was as if they were reflecting something back to me – my feisty and fierce side that wanted to come out yet I’d repressed because “nice girls” aren’t like that. I felt I’d shrunk and was hiding in my shell, yet these little guys and gals showed me that even small creatures can be like Warriors and stand up for themselves.

I didn’t know it then, but that awakened something within me.

Around this time I started writing children’s stories inspired by what I’d seen the birds do. Whenever I saw the birds, I’d imagine what was going on, what they may be saying to one another, and how I could translate those observations into stories that could help children realise it’s okay to be themselves, for example.

Mum and Dad’s enthusiasm for the birds had rubbed off on me. Or was it that I remembered that I had loved animals and the birds reminded me of that? 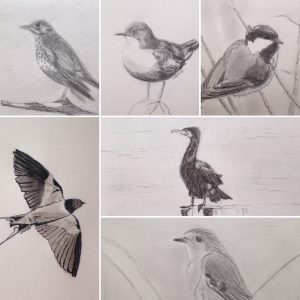 In any case, my love for them grew and grew. The more I observed them, drew them and wrote about them, the deeper my appreciation and love went. The more I got to know the birds this way, the more I wanted to be around them, to see them, to hear them.

They had opened me up and in turn captured my heart, softening me, reminding me of who I was and of my own beauty that I’d long forgotten. They’d become my beacon of hope and inspiration in the time I needed something to guide me out of a dark hole.

Glimpsing a bird or catching the sound of their song brings a smile to my face and a flutter in my heart, and if I am ever in a rush they remind me to breathe and be grounded. Birds put things into perspective for me, too, and seeking them out continues to inspire my creative expression whether that’s through writing, art making and/or photography.

I now can’t imagine my life without them.

What captures your heart? How can you seek those things out more often?

2 thoughts on “How I Came To Love Birds”