Bonding With My Dad Over Birds

During a recent trip to The Netherlands to visit my parents and my brother, my dad and I went to one of our favourite local bird hides on my last day. I wasn’t flying till the evening so I had a full day to do stuff. 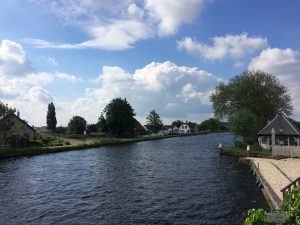 We parked near the end of a no-through lane in one of the handful of spots on the side of the road. To get to the hide we had to walk on a bike path over a drawbridge for bikes, crossing the Vliet canal as a couple of rowing boats passed under us. The wind had picked up causing the water to be a little choppy. To the south clouds were building but the sun was still shining through and the sky to the north was blue. It looked like it would stay dry at least for the morning.

We followed the bike path to where it ran parallel with a one-lane road between two man-made lakes, the bird hide being on the bank of one of them. Here we left the bike path and walked along the embankment of Vlietland, the lake to our left. The path is normally a horse trail, but there was enough space to walk along it if we came across a horse and rider. Though we had to step aside when a man on a quad bike tore down the path leaving us in a wake of dust! 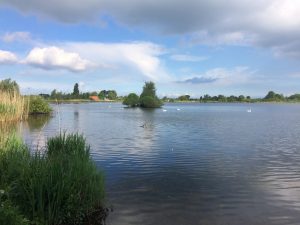 We decided to follow a path along Vlietland first, to see what was there before circling back round to head towards the bird hide at Vogelplas Starrevaart, the lake on our right. We walked along the banks of Vlietland and saw dozens of swans. Dad had read on the Internet before we set off that someone had counted 200 of them (there is a website you can access to see what people have seen on a day to day basis). We could hear a cuckoo in the trees nearby and as we circled round these trees we could almost pinpoint where it was by its sound (but we didn’t see it!).

We were also hoping to catch a glimpse of a kingfisher in a pond on the way to the other lake, and instead found a heron standing still and tall in the water on the opposite side to us.

We walked along the bike path again to get to the bird hide De Vogelknip, where upon entering I was delighted to see we were the only ones in there. Last time there’d been a group of birdwatchers (I’d guessed of my dad’s age, possibly retired like him) with their big cameras and telescopes and it was a squeeze to find a spot to sit and look out of the open hatches. A couple of the older Dutch women in there were chatting loudly and we wondered whether they were disturbing the birds! One of the older men, who I think had organised the outing, was trying hard to get them to lower their voices, or stop them talking altogether, but it seemed to fall on deaf ears. I had to chuckle and got on with my sketching and observing and I soon found myself in the zone and their chatting faded into the background.

This time it was nice to have the hide to ourselves to enjoy the peace and quiet. Well, we could hear the birds chatting loudly but I didn’t mind that kind of chatting! 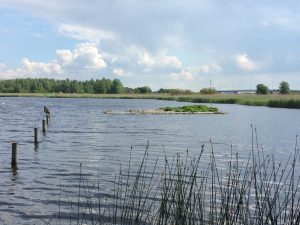 Compared to my previous trip to the hide in March, where we saw lots of godwits, cormorants and oyster-catchers, this trip we encountered hundreds of swans, and a small flock of arctic terns, black-headed gulls and avocets, all nesting on the little island to the right of the hide. Amidst the hive of activity, we saw two terns mating, an avocet chasing off terns to protect its two chicks who were scavenging up and over the stones around the edges of the island, not quite dipping into the water and seemingly not aware of any potential ‘danger’. It was incredible to see how these three types of birds were co-existing on this tiny island. I took some photos as well, playing around with Dad’s camera and telephoto lens.

Dad and I stayed for a bit then left as a couple were entering the hide. We said hello and walked back towards the beginning of the path to the hide where we could either walk back along the bike path or the path on the embankment that ran along part of the lake. I suggested we take the latter path through the grass and wildflowers as we would be able to view the lake better. Here we found ourselves surrounded by beautiful butterflies that we’d never seen before: green-veined whites and small coppers.

I wouldn’t say we were disappointed with the birds we’d seen from the hide, but there was perhaps a little feeling that we hadn’t seen what we’d hoped we would see. I guess we were secretly hoping there would have been more birds around as there have been times when the little island was overcrowded, and all the wooden posts in the water were occupied.

But…the best was still to come. 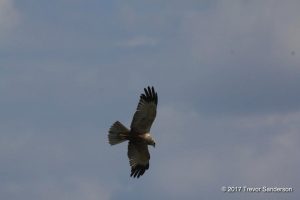 We had only walked a few metres along the embankment when I suddenly saw something in the distance. It looked bigger and browner than the arctic terns who were flying over us with flapping fish in their beaks, fish that seemed at least three times larger than the size of their beaks. I held my breath as I thought “Could it be?”. I looked through the binoculars, and yes, I was right. It was a bird of prey! I pointed towards it and Dad looked through his camera to identify it and said it was a marsh harrier.

It was a beauty.

Hovering over the reeds, not disturbed by us in the slightest, the marsh harrier was going back and forth, every now and then flapping its wings rapidly whilst looking down, obviously on the hunt for food. It was incredible to watch. We saw him three times as he came and went and must have gone down into the reeds when we could no longer see him.

In the meantime, a stork flew over – I’d thought it was a heron from a distance but looking through my binos I was surprised it was a stork. It looked huge due to its wingspan. Nearby there was a stork’s nest on a pole in someone’s garden and we assumed it was one of the parents, possibly finding food whilst the other was on the nest. 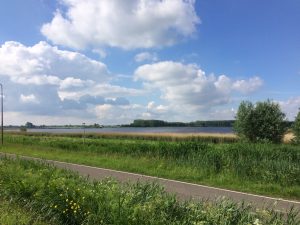 It was so much fun! To see as much activity outside of the hide as well as from inside. And I’d never seen a marsh harrier like that before. I loved how these birds were going about their business whilst only a few metres away there is the always busy A4 motorway, roads and bike paths with people continually passing through. The contrast between two worlds; however, they seemed to exist in harmony. Vogelplas Starrevaart is man-made and built for the purpose of housing migrating birds, and they seem to have embraced it and made it their own.

We took our time heading back towards the car. I felt like we’d been out for hours but it had only been just over an hour and a half! We headed home to have our morning cuppa and to inspect the photos we’d taken and talk more about our little adventure.

I’m thrilled that I have found something in common with my dad. Something that we can do together, just the two of us. I know for me it has made our relationship stronger, our bond closer.

What I enjoy most is how similar we are when we are walking in nature and spot different birds. We will stop mid-sentence and point towards a bird, or ask one another “Did you hear that?”. Then we’ll continue chatting as if there hadn’t been any interruptions.

We take our time during our wanderings, to observe the birds, and to take photos. Or if we’re in a bird hide, I will sketch as well. We fall into a similar rhythm without having to try. It just seems to happen.

And I love how we stay in touch when I’m back in Scotland and we continue to share what we’ve seen through emailing each other our photos, stories or my drawings. Thanks, Dad!