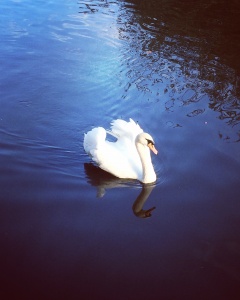 It’s been a few months since my last “proper” post and it makes me chuckle to think its subject was Resistance. One may imagine that not having blogged since then may have been caused by said Resistance!

But that’s not true.

The reason I haven’t been blogging is because my auntie passed away not long after that post.

Since then it didn’t feel right to be blogging like nothing had happened. Even posting about her passing didn’t feel like the right thing to do.

Instead I accepted that I wasn’t to do any “public” writing. It was all private, sacred, just for me.

What I needed was to retreat. Retreat to recover.

In the months after my auntie’s passing I continued writing. I wrote a lot of draft poems. I journaled. I wrote some more. Two new drawings emerged; my creativity soared. It was gushing out of me like someone had opened a tap within me and forgot to close it.

With the words pouring out, the tears followed…and when the tears came the words splashed out onto the page. They were inextricably linked.

For a little while I felt bad for not posting on my blog. I’d got into a bit of a rhythm and I’d had lovely feedback from people enjoying my posts. I wondered if they’d noticed I’d not posted anything. Then a little gremlin voice would say, “Of course not, everyone is too busy to notice.”.

“You need to look after yourself,” a loving voice would counter.

A little tennis match between those voices would ensue until I’d had enough and I surrendered. 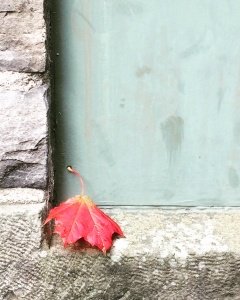 Reading Stephen King’s On Writing (2000) made me feel better about not having posted anything publicly. He states that it’s important to write with the door closed until everything has been put down on paper. I needed that “cave time” to reflect on what had happened, process the shock and grief surrounding my auntie’s passing.

It had hit me hard.

Funnily enough and seemingly out of nowhere an invitation to be featured in a group art exhibition found its way to me and without really thinking about it too much – I was still immersed in grief – I accepted it.

It was what I’d been wanting for a long time: a chance to exhibit most of my wildlife drawings. I chose 15 of them to showcase. 10 of them still needed to be framed! I had about three or four weeks to get ready and I was going on holiday with my boyfriend in the meantime.

What was I thinking accepting the invitation to exhibit?!

In hindsight I am glad I went for it because it gave me a focus, a direction, something to do so that I wouldn’t retreat too far and get lost in the grief.

I also gave myself enough space to feel my feelings and experience the loss. That to me is an important part of the healing process.

But it felt good to have a positive distraction, a temporary relief from those emotions. The holiday with my boyfriend was perfectly timed, too. To not think about work, disconnect from social media and the Internet, spending time in nature, as well as doing fun stuff like going to the cinema, the rugby and a music concert.

It all helped me to recharge and recover so that I could arise a little stronger.

The absence of my auntie still saddens me, though my emotions aren’t as intense as in the beginning. It feels surreal at times. I catch myself thinking she’ll show up at any minute, as if she’s just popped out to the shops. And when she comes back she’ll ask if I want a cup of tea, or can she make me a sandwich? She was always looking after her family. 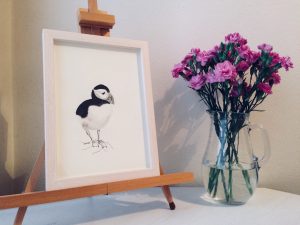 One of my drawings in the exhibition, Puffin Power, was inspired by one of her puffin photos taken at Bempton Cliffs, a nature reserve in Yorkshire run by the RSPB. She had loved that I’d done that. I’ve now dedicated that drawing to her.

I know she would have loved that, too.

1 thought on “Retreat To Recover”