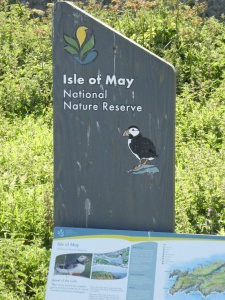 Finally, after wanting to go for over a year I was on the May Princess heading to the biggest puffin colony in the UK:

The Isle of May.

After hearing about this little island from various people who’d been, I was itching to go. I wanted to see the puffins in their natural habitat. I wanted to see for myself the abundance of birds that I’d been told were there.

It was my July mini-adventure with my friend Heather – if you’ve been following my blog for a while you’ll know we go on monthly mini-adventures together – and this time we were joined by her husband, Bob.

I’d driven from Edinburgh to Halbeath Park and Ride near Dunfermline where I left my car for the day. Heather and Bob picked me up so we could travel in one car to Anstruther, a little fishing village about 45 minutes east from the Park and Ride. In Anstruther we’d catch the boat to the Isle of May. 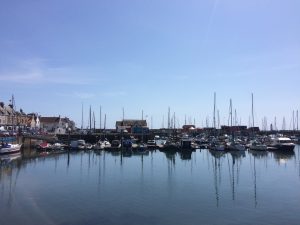 We arrived around noon and had our packed lunch sat on a wall surrounding the pretty little harbour. We could not have asked for a better day: the sun was shining, it was warm with a pleasant cool breeze and once we were on the water the boat ride was pretty smooth.

Once a day the May Princess goes out to the island but at different times depending on the tide. We departed at 1pm that day and it took about 45 minutes to get close to the island, and then the captain slowly took us round the northern part so we could get a good look before docking.

It was an incredible sight.

I’d never seen so many birds. They were everywhere: in the sky, in the water, on the rocks together with some seals. Seals’ heads were bobbing up and down in the waves as we passed, too. An astonishing amount of birds were flocking around us. On the way to the island we’d also been blessed by the gannets swooping past and overhead – something I’d not expected to see and was thoroughly delighted by. The birds in the sky almost looked like a swarm of insects, or like a flock of starlings, though not moving as rhythmic and in harmony as starlings.

Time stood still. This was my kind of heaven. I could feel the excitement rise up from my tummy and it filled my whole body, permeating every single cell of my being. And it was only the beginning, we hadn’t yet set foot on the island. 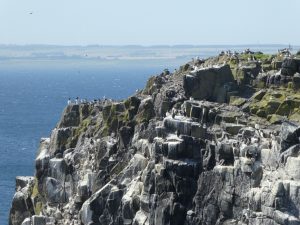 The captain was telling us about the various birds, what we would encounter on the island, as well as information about the buildings there, including the oldest lighthouse in the UK, the Beacon, from the 17th century. He told us that about a dozen people stay on the island from April till September conducting research, monitoring (wild)life and looking after it since it’s a Scottish National Nature Reserve.

Coincidentally, two days before our trip I’d been watching Countryfile, a programme about the British countryside on BBC1, and the Isle of May was featured in a few segments during the programme! I loved that synchronicity.

We docked and as we walked up the concrete jetty we were greeted by one of the volunteers, Sarah, who told us some rules whilst we were on the island and when the boat would be leaving. We would have about 3 hours to spend here!

After the short introduction we were off and we walked to some cliffs where again the sight was breath-taking. There were puffins everywhere. 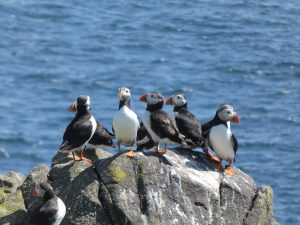 Never ever have I seen so many birds in one place…I was speechless.

I remained rather speechless during our visit. I wanted to take it all in and words just didn’t seem appropriate. I couldn’t even find the words. My thoughts disappeared. I wanted to be in the moment, allowing the beauty to infuse me, to transport me to this other world.

The silence also meant I could hear so much. Sounds like a paradox, but it was amazing. I could hear the flutter of the wings as birds flew over me, and the vibration of that passed through me like an electrical current. It sounded, and felt, powerful; I don’t know how else to describe it.

The arctic terns were loud and protective so we were advised to walk quickly past their colony. Heather and I remembered from our trip to Inchcolm Island how the female gulls had been protective of their chicks and we were almost attacked by them as we tried to walk along the paths to different parts of the island. We had to turn back after 100 metres or so as it was intimidating and not enjoyable at all! You can read about that mini-adventure in my post Attack Of The Gulls.

I certainly understood why the gulls were behaving like that on Inchcolm Island as the chicks were milling around on the ground, not yet able to fly as they were still fluffy and without their flight feathers.

The same seemed true for the arctic tern chicks, though they looked like they were almost fully fledged. However, watching them from a safe distance in the small visitors’ centre, I could see that the parents were returning with food for their young, making it seem like the chicks could not fly and find food for themselves yet.

We walked along the clearly marked paths round a fair portion of the island, and everywhere puffins seemed to be popping up or lounging around. Some with a few eels dangling in their beaks! 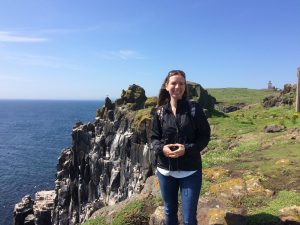 The cliffs were magnificent and the guillemots, razorbills, and kittiwakes were perched on any kind of ledge of any shape or size. Amazing to see how they were able to do that. Some looked like they could fall off at any minute. Puffins nest in burrows and burrows were dotted all around the island, however, I must confess I was a little disappointed we didn’t see any of their black fluffy chicks.

Every now and then we spotted a rabbit munching on the grass, seemingly oblivious to us passing them.

It was great to hear there were over 45,000 pairs of puffins on the island, but it saddened me to learn the amount of nesting pairs has dropped from around 69,000 pairs (in 2003). It is thought that climate change and polluted parts of the sea have had an impact. It reminded me to keep doing my bit to care for the environment, to be conscious about the choices I make and what impact they might have. It would break my heart if puffins (or any animals for that matter) were to go extinct and future generations would not be able to experience and delight in them, like I could that day.

As we boarded the May Princess to return to Anstruther, a few more volunteers turned up and were saying goodbye to us (as well as two of their volunteers who were finishing up for the season and coming on the boat with us). I smiled as I recognised one or two faces from the Countryfile programme.

Our trip was rounded off with a delicious fish supper (that’s fish and chips in Scotland!) from Anstruther Fish Bar, a local award-winning restaurant that was so popular the queue continued outside and around the corner of the building down an alleyway. It meant it took a while to get our fish supper, but it was worth the wait.

Heather and Bob dropped me off at the Park and Ride around 8pm and I drove back to Edinburgh. When I arrived home and downloaded my pictures from my iPhone and Panasonic Lumix, I saw I’d taken just over 600 photos! Plenty of photos to choose from for inspiration for my next drawing(s).

One I will cherish forever.